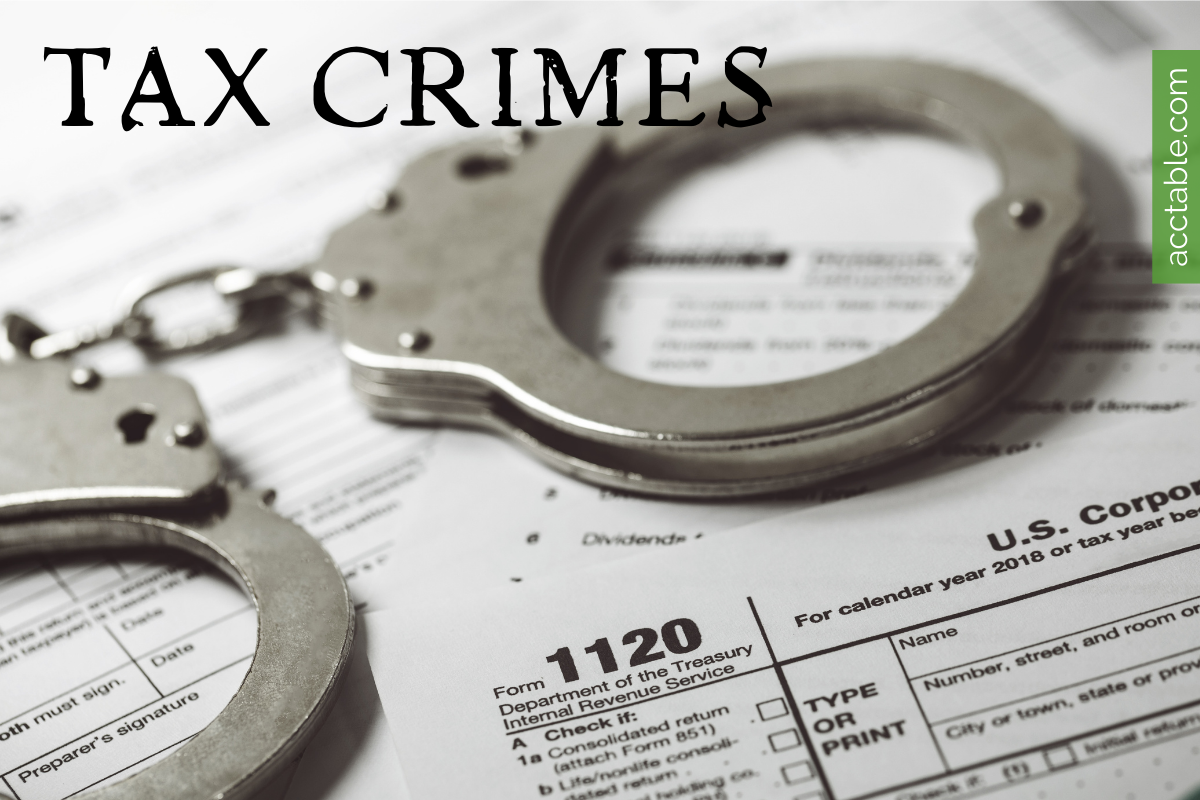 We all have a neighbor, friend or colleague who boasts about not paying any income taxes.  Have you wondered to yourself, “How is that even possible?!”  You file and pay your income taxes every year and don’t understand how this person is getting away with not paying any taxes.  We can’t say whether the person you are listening to is being honest or not.  We can tell you, as a CPA office, that we hear some crazy stuff.  Not too long ago, we had a potential client tell us they found another accountant that guaranteed they would never pay any income taxes if they paid him a monthly fee.  We are always shocked on how creative people get to escape paying taxes.

The truth is not everyone gets caught, but many do.  We recently have learned more about the IRS Criminal Investigation department, and they are fascinating.  In 2021, they had a little over 2000 special agents finding more than 10 billion dollars with an incarceration rate of almost 80%.

We only hear about the high-profile cases that involve actors, musicians and people in the public eye, but don’t let that fool you.  The IRS CI is trained to follow the money, regardless of popularity.

Below a snapshot of their recent work directly from the IRS’s site:

The types of criminals pursued by IRS-CI already this year are illustrative of the breadth and importance of their efforts, as well as the sophistication of the enterprises that they work to disentangle, which are set up to ensure that the illicit behavior of wealthy criminals remains unaddressed. The following information is obtained from publicly available documents.

A Georgia man was sentenced today to 230 months in prison for charges related to his filing of dozens of fraudulent tax returns on behalf of multiple sham trusts.

Marquet Mattox, of Lilburn, was convicted by a federal jury on August 18, 2021, of wire fraud, false claims and theft of government funds. According to court documents and evidence presented at trial, from 2016 to 2018 Mattox filed more than 30 fraudulent federal income tax returns with the IRS in the names of approximately 12 different trusts. On those returns, Mattox falsely reported that the trusts had withheld large amounts of taxes on purported interest income, thereby entitling the trusts to refunds. In total, Mattox claimed approximately $165 million in refunds on behalf of the purported trusts. The IRS paid $5 million of the requested refunds. Mattox used those funds to purchase a new house, a luxury automobile and other personal expenses.

“It’s an injustice to all those who rightfully pay their taxes when an individual criminally takes advantage of the system, in this case defrauding taxpayers of millions of dollars,” U.S Attorney Peter D. Leary. “Our office and our law enforcement partners will do whatever it takes to hold fraudsters accountable for their crimes.”

“Marquet Mattox secured $5 million in fraudulent refunds by inundating the IRS with dozens of false returns on behalf of phony trusts he owned and controlled,” said Acting Deputy Assistant Attorney General Stuart M. Goldberg. “His significant prison sentence today makes clear that fraudsters will be identified and prosecuted, no matter how persistent or complicated their schemes.”

“Mattox made multiple attempts to defraud the Internal Revenue Service of over $117 million,” stated IRS-Criminal Investigation Special Agent in Charge James E. Dorsey. “IRS has systems in place to detect and prevent fraud; attempting to file false claims for refunds is a federal crime. Today’s sentencing reflects the seriousness of Mattox’s actions and greed. Taxpayers should be wary of any individuals promoting and using schemes to submit false filings to the IRS. Should you come across such a scheme, please report it to IRS Criminal Investigation.”

According to court documents, Sergio Sosa, of Orem, owned and operated Sergio Centro Latino, a tax return preparation business. From 2004 to the present, Sosa conspired with his two adult children to defraud the United States by concealing Sosa’s assets and income from the IRS. From 2003 through 2017, Sosa also did not timely file his own tax returns or pay the taxes he owed for these years. After the IRS audited Sosa and began efforts to collect his then pending tax debt of more than $750,000, he obstructed those efforts by using nominees to open corporate bank accounts, renaming his business and placing it in the names of his children, and making false statements to the IRS. Sosa also directed his daughter to make mortgage payments on his personal residence using funds he provided to her. In total, Sosa caused a tax loss to the IRS exceeding $1.1 million.

Acting Deputy Assistant Attorney General Stuart M. Goldberg of the Justice Department’s Tax Division and U.S. Attorney Trina A. Higgins for the District of Utah made the announcement.

IRS-Criminal Investigation is investigating the case.

Trial Attorney Ahmed Almudallal of the Tax Division and Assistant U.S. Attorney Ruth Hackford-Peer for the District of Utah are prosecuting the case.